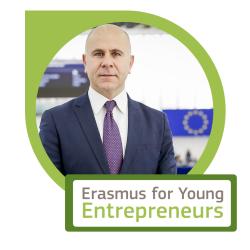 
Over the years, the programme has proven to be an effective opportunity for exchanges between the young people involved and the host entrepreneurs, thus creating synergies between different generations and merging innovative ideas with skills acquired after many years as the head of a company.

Mr. Salvatore De Meo has been a Member of the European Parliament for the European People’s Party Group since February 2020. Mr. De Meo was elected in the list of the Italian centre-right party Forza Italia in the central constituency (Lazio - Umbria - Tuscany - Marche).

Mr De Meo also held political roles in the municipality of Fondi, a city located halfway between Rome and Naples, being elected first as a councillor in 2001, then as town planning councillor in 2006 and finally as mayor in 2010, a political role that he kept until February 2020. In addition to this, in 2009 he became Provincial Councillor of the Province of Latina.

Before embarking on a political career, Mr. De Meo obtained a degree in Law in 1994 at Sapienza University of Rome, and in 1995 he became Director of an agribusiness company operating at Fondi, one of the largest fruit and vegetable wholesale markets in Europe.

He is married and father of two girls.