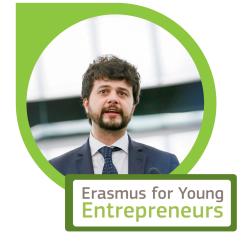 
I strongly support Erasmus for Young Entrepreneurs as the programme helps entrepreneurs builds more resilient companies. Entrepreneurs can tap into new EU markets thanks to the connections made in the programme. It also stimulates the entrepreneurial mindset, which is a fundamental element for the growth of any EU country or Europe as a whole

Mr. Brando Benifei, 29, convinced European Federalist, was elected in May 2014 as the youngest Member of the European Parliament among the Italian representatives of the Democratic Party. He is active in the Employment Committee as well as the Foreign Affairs Committee as a member of the S&D Group. He is vice-chair of the Youth Intergroup and of the Intergroup on Disabilities.

Mr. Benifei previously worked as the person in charge of European affairs for the Democratic Party in the Italian region of Liguria and for the Young Democrats at national level. He has also been the Vice-President of the youth organization of the Party of European Socialists (ECOSY) for four years, during which he took part in numerous educational and training activities on European topics and in several European demonstrations. He joined the PES working group which drafted the preliminary version of the European Youth Guarantee, later adopted by the European Commission.


« Back to the overview