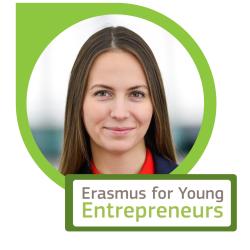 Eva Maydell (née Paunova) is a Member of the European Parliament. She is the President of the largest organisation of associations and civil societies in Europe - European Movement International as well as the initiator and a co-founder of Education Bulgaria 2030. In the European parliament she is member of the Committee on Industry and Energy as well as the Economic Affairs Committee.

Maydell´s priorities focus on enhancing skills-creation and quality education, implementation of innovation and technologies, supporting entrepreneurs and investment in Europe. She believes quality education is fundamental for societal progress and economic development, which is why she works at European and national level to create education policies, which enable youth to develop their talents.

Eva Maydell´s work has been recognised by the Financial Times, which included her in the "New Europe 100" ranking of CEE´s brightest people that are changing the status quo through their ideas. She is also part of the European Forbes 30 under 30 list. Politico defined her as one of "the most eye-catching 28 people from 28 countries who are shaping, shaking and stirring Europe". Eva Maydell has been awarded the "MEP of the Year” Award twice. She was named among the 20 World's Most Influential Young People in Government 2018 by Apolitical.