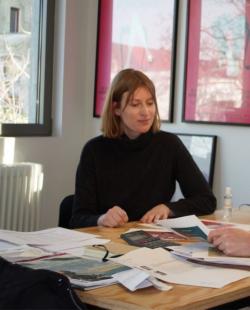 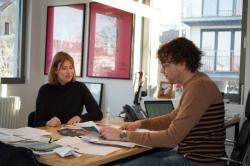 The cooperation gave me the opportunity to learn how the film production industry works abroad and strengthen my skills in this field. I came into contact with many producers and people in the industry. The level of responsibility I was given during my exchange was high which gave me more self-confidence.


As an experienced entrepreneur I find it enjoyable to encourage entrepreneurship in an entrepreneur who is at the start of her career. But my objectives are not merely socially engaged. The reflections of the NE on our company and our way of doing things will positively strengthen our company.

Dries Phlypo is an experienced producer and entrepreneur from Ghent, Belgium, who has been in the film business for over 17 years. He joined A Private View, an independent Belgian film production company, in 2004. Since then he has produced 7 successful feature films. APV produces fictional animated films and series. In addition to its own productions, the company co-produces films and series with other international production companies. The core business of A Private View fitted well with the future plans of Rosa Duvekot, a new entrepreneur from the Netherlands. She had worked in a documentary production company for 3 years before joining Atelier Ludwigsburg Paris, an EU programme for aspiring producers. In the future, she would like to focus her own production company on Latin America. When she was thinking about the next step to achieve her dream, she became aware of the Erasmus for Young Entrepreneurs programme. After being accepted and researching the host entrepreneur, she contacted Dries and was excited to start the exchange in Ghent.

During the two-month collaboration, Rosa was able to focus on the basics of production. The five main topics she focused on were: project management, planning activities, financial and legal matters and finally distribution. Among other things, Dries taught her how to create schedules, interpret financial plans and contracts, and how to make a proper funding application at all stages of production. She was able to put the skills she learned into practise by working on a production that was about to start. In addition, Rosa was able to gain insight into the process of co-productions. Thanks to his extensive experience, Dries was able to help Rosa with her business plan. Rosa supported Dries in submitting film plans and gave him feedback. She also supported him in the execution of her own upcoming production

Both entrepreneurs are glad that the exchange could take place despite the current Covid 19 crisis. Nevertheless, the measures have left their mark on the course of the exchange. Since most colleagues work from home, communication is digital, which makes the social aspect (so important in the production profession) more difficult. Despite this, Rosa does not regret her choice. The insight into a successful production company was extremely instructive. Rosa gained more confidence in her abilities and met many interesting people from the film industry both in Belgium and in other European countries. Dries offered her to continue working with him for a few months after the end of the EYE exchange, which she gladly accepted.