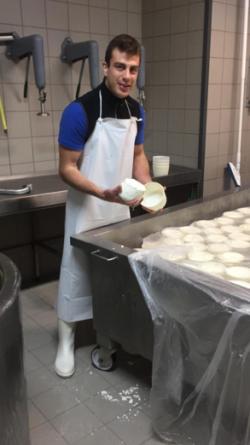 The programme helped me acquire competences essential for the launch of my project. From a human perspective, I have been very lucky to meet fantastic people who were really committed to help me.


I was happy to work with new entrepreneur Anne, it helped me to better understand the French market. In fact, I am planning to travel to Brittany soon to meet local cheese makers.

Anna Vincenzotti's initial project was to create a cheese making activity at her partner’s dairy farm, in North East of Brittany.
Unlike most regions in France, Brittany has no history of traditional cheese making. Over the past years, several dairy producers have started to launch their own cheeses thus meeting the demand for genuine local farming products.
However, recipes are often identical and the cheeses produced do not vary much from one another. Anne called by her Italian origins, had thus the idea to learn the Italian know-how of cheese making to develop an activity based on this technique.
Erasmus for Young Entrepreneurs gave her the opportunity to get in touch with "Azienda Agricola Piccinato", that she chose as host company. They are dairy farmers and producers of cheese she is interested in, a "DOP called Montasio".
Andrea Piccinato, the owner of "Azienda Agricola Piccinato", was interested in working with Anne and thus accepted to share his know-how and techniques with her.

During the exchange, Anne got involved in the farm daily activities ranging from taking care of the animals in the farm, in the mountain pastures, to the milking of the cows.
Besides this, Anne also learned the cheese making process which took place in two places: at the farm together with Davide in charge of the cheese production. He helped her understand the work he is doing at the farm and gave her precious advice on how such a product is commercialised, the investments needed and the budget allocated.
Anne also had the great opportunity to meet the master cheese making Giovanni Gardenal, "latteria Maron di Brugnera”, taught her how to prepare a wide range of cheeses from Montasio to ricotta, mozzarella, yogurt and more.

The benefits that Anne has gained from this exchange went way beyond her expectations. Thanks to this exchange, she is able to make the type cheese she want as well as other types that she never thought of making one day, such as Mozzarella or Gorgonzola. Anne is convinced that these product will be successful in Brittany.
The stay at the farm also helped her measure some crucial factors such as the time needed for the activity or the financial investments needed.
Finally, both Davide and Giovanni gave her useful tips on how to launch her own project: what to buy, where to buy, how to start cheese factory with limited equipment as well as how to conceive own laboratory.
Anne fully enjoyed the collaboration with Andrea and his family even though most practices are mostly identical, they were very interested in Anne' techniques and personal touch.